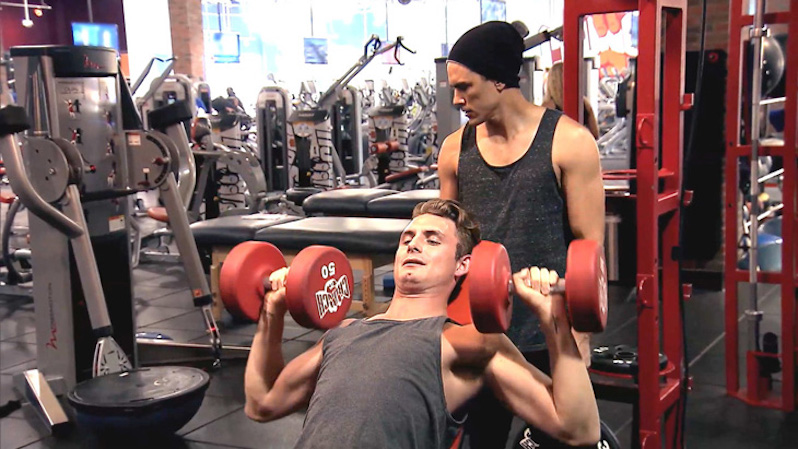 K I really dont know what Ive done to piss off the Bravo gods but they are not putting the episodes up the next day and I dont have cable so IDK WTF Im gonna do. Maybe Im gonna have to find someone I can Cable & Chill with? Because this streaming shit is getting rididuclous.

Since Im complaining, I might as well also mention how Im writing this with frozen fingers I can barely move, seeing as its freezing af in my office and they all want to kill us by not putting on the heat. THE SACRIFICES I MAKE FOR THESE RECAPS.

Anywho I know yall don’t care about that, but I write these recaps, therefore I am God. Now onto the real bullshit that is .

We open on LAX where Tom and Katie are flying out to Lake Tahoe, where their wedding venue is. Does this count as a destination wedding?

Toms still like Lets get married right now outside the airport, wed save a bunch of cash.

HE LITERALLY TELLS THE OWNERS OF THE VENUE THAT HE WOULD HAVE WANTED TO WAIT ANOTHER 6 YEARS TO GET ENGAGED. Seriously, if this dude makes it out of this episode with his dick attached to his body, Ill be surprised.

Katie doesnt like a rustic look so shes getting married in the middle of the woods.

Venue lady: How did you and Katie meet?
Tom: We got drunk and had sex.

^Me one day. BUT. I need a drink to deal with this secondhand embarrassment. I’m actually feeling bad for Katie, kind of?

OK Im salaried and I have like $8,000 in my savings. How are these servers saving up over $24K to pay for this wedding? Tom, Katie, whos your financial planner?

Sandoval is still working out in a beanie/swim cap for some unknown reason. I am jealous of Arianas gym body, because I didnt already hate myself after the VS Fashion Show last night. But like, they never actually break a sweat sooo … what workout plan is that?

James shows up and tells Tom and Ariana that he got fired and theyre surprised. Really though? Toms like thats bullshit am I taking crazy pills? It was bullshit to keep James on staff as long as Lisa did.

I honestly forgot Brittany existed until I just heard her Southern twang in the background.

Lala is wearing a bodycon turtleneck, which is the most clothing Ive seen her wear all season. 4 for you, Lala. You go, Lala.

Schwartz is doing some underwear modeling to pay for his wedding. But why male models? The photographer asks if he needs to stuff his junk and hes like nah Im just cold. Thats what they all say.

Back at Sur, Jax is over an hour late for his shift and has gone MIA. Jax being irresponsible? No way!

Lisas like Dont give him his tips. Hit him where it hurts. But “where it hurts” would actually be his dick tho. Give him syphilis?

Tom and Ariana are riding together on a non-tandem bicycle because theyre just so cute and relatable.

Arianas brother is a huge cock block, basically. Ariana not-so-casually brings up having kids and marriage. Tom thinks buying a house is a bigger commitment than marriage, because in Toms mind a 30-year mortgage is a longer time commitment than THE REST OF YOUR FUCKING LIFE.

Cool Girl Ariana doesnt want to surrender to societal pressures by getting married. Call me when you stop being a clich.

Lala is on a hike with some equally fake-looking bitches. Theyre apparently “like Lalas sisters” even though were just now learning of their existence. They, too, would suck dick for a Range Rover, so ok I get why theyre friends.

Im actually pretty shocked Lala didnt find out from James directly that he got fired. Lalas like this is terrible, whos gonna sneak me drinks now? You get red wine and put it in a coffee mug. God, Lala, have you ever even watched this show?

How are these people your sisters if you never knew one of them hooked up with James a month ago?

This bitch took a post-coital selfie. Is this like the modern-day Monica Lewinsky blue dress thing?

Lala is shocked that James would cheat on his girlfriend. Really though? Youre shocked? Do we know the same James?

The group and Sandovals terrible hair all go out. Apparently Katie knows Ariana is a groomsman but like, Katie doesnt seem fazed by it. Fuck you Bravo for cutting that scene out because I KNOW Katie was not chill then she first heard that news.

I cant even concentrate on this fight because all I can think of is who gave Sandoval those highlights? A hairdresser from the early 2000s?

I liked Jaxs impression of James but what local Applebees has a DJ? Spoken like someone who doesnt even fucking go to Applebees.

For once I agree with Kristenits not Jaxs fault James got fired. Its James fault.

Scheana, if youre asking if you got too much botox, the answer is always yes.

Seriously why does no one believe James got fired? This is EXTREMELY easy to believe.

Ariana tells Kristen that her veneers aren’t noticeable and Kristen acts like she called her fat. And thus commences WW3.

Kristen: You cant compare me to James Kennedy.
Ariana: Well you both have a propensity for punching people.

^Just proved Arianas point (and mine). Have a seat, Kristen.

DJ Speakeasy on the ones and twos, still with the worst name ever.

Lisas giving the guys new outfits but is still having the girls wear those Ed Hardy dresses from 2002.

Apparently this girl Ellie who fucked James is 34. Just in case any of you need to feel better about your lives, THIS RIGHT HERE IS IT. You might not pay your rent on time, but at least youre not in your mid-30s dating a 23-year-old restaurant DJ with a drinking problem.

Ellie and Scheana get lunch and Ellies like I didnt tell anyone about James because I was so ashamed.

New douchebag status: having sex with a girl while telling her she means nothing to you.

How low is your self-esteem that youre gonna let an unemployed stringbean-ass DJ call you names?

Scheana wins Hypocrite of the Year award for calling Lala a dishonest person who cant be trusted because Lala is dating a married guy. Come the fuck on, is nobody going to bring this up??

Katies bangs are really not working for her. I AIN’T SORRY.

How fucking rich is Lisa that she buys herself a new luxury car every year? Can I get a job at SUR?

Schwartz be like: I want a dragon for Christmas this year.
Santa: Be realistic
Schwartz: OK I want a Porsche
Santa: *sigh* What color do you want your dragon?

Schwartz is joking about not having a wedding. This is like every fuckboy insult 101: say something really shitty, then when she gets offended, claim it was just a joke and gaslight her into thinking shes too sensitive.

I semi take back what I said last episode about Schwartz being a really good guy who doesnt belong with these assholes. Although not sure what Katies jab about Toms dick not working has to do with anything. Could it be that … they both suck? I might be onto something here.

I love that these people have to have a fucking meal everytime they have gossip to share. Like, just send it in the group text like the rest of us.

Also, are these girls ever not drinking?

Kristen, you really gonna gag when you hear Ellie dated James? I think shes tying with Scheana for Hypocrite Award.

ALSO, Kristen, you cant really say you dodged a bullet when James cheated on you, too. You got hit by the same bullet, as far as Im concerned.

SOOO Lalas boyfriends wife found out about their affair because she stumbled upon their sex tape while going through his phone. This is dumb on so many levels, but I guess the first would be: If youre stupid enough to record a sex tape with your mistress on your phone, at least get a burner phone. Actually no, if youre that fucking dumb you deserve to get caught. This has been my PSA.

Like honestly, I love Lisa but Im not sure how this flower scene has added to my life or viewing experience in any way. Except for maybe Katie trying to describe different flowers. Honestly, not even that.

James really is the white Kanye West. Its probably the most accurate thing hes ever said.

James: All these girls want a piece of the cake but theres not enough cake to go around.

Last week it was the thirsty comment, this time it was the cake. I guess if James was a food, he would be cake, though, because there is absolutely nothing of value inside him.

James looks through the photos of Ellie in bed with him and is like this proves nothing. Taylor Swift should take cues from James Kennedy. Or, I suppose, Shaggy.

So basically Im learning that anytime someone says they didnt fuck someone on this show, it means they 100% fucked them. Glad it only took me 5 seasons.