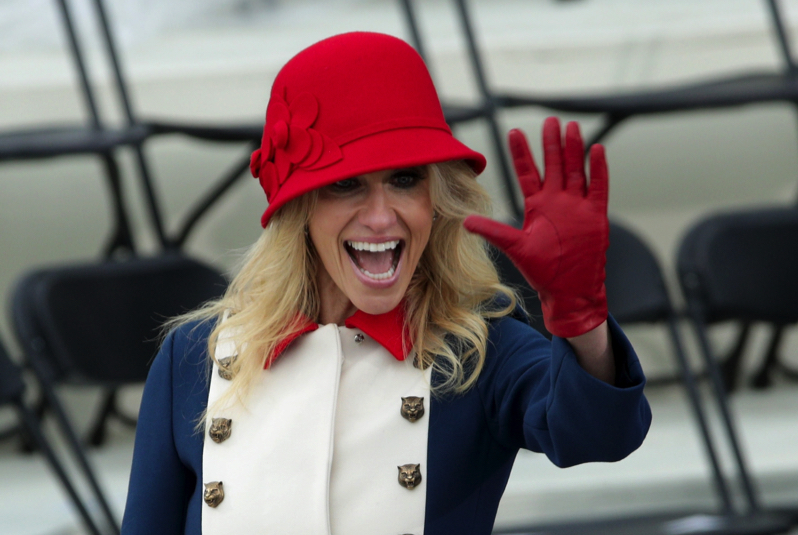 Friends, lovers, betches: One of our nation’s great institutions is under attack. No, not inconsequential shit like women’s rights, healthcare, our reputation in the world, the environment, the economy, our nuclear defenses, voting rights, or the safety and security of minorities.

Kellyanne Conway is the straw-haired, dead-eyed succubus weirdly (and irresponsibly) humanized by who wormed her way into the president’s ear and brain, not unlike the way an amoeba would when swimming in dirty water. And because subtlety and class are the provenance of faggy libtards, she wore this to Donald Trump’s inauguration:

I love you Kellyanne

A photo posted by Head Pro (@betchesheadpro) on

She caught a lot of flack on social media, which she should have, because she looked goddamn ridiculous, like if Paddington Bear was auditioning to be an extra in . Michael Wolff (inexplicably) brought this up in his interview with Conway for, and instead of her usual “lie-lie-lie-PIVOT” tactic she uses when confronted with facts she doesn’t like, she said this:

For one thing, charging someone $3,600 for that monstrosity sounds like a crime until you consider the kind of flag-humping sucker that would buy it. Secondly, what the fuck, Kellyanne?

There are two ways to see this very mild burn. One is that it’s directed at the kind of latte-sipping, yoga-practicing young woman scattered as far as the eye can see in and around our nation’s capital. We all know that DC just isn’t as stylish as New York [wanking motion], and Kellyanne (who’s spent her whole career here hiding under staircases and licking people’s boots) would know this as well as anyone.

But the other, much more salacious and biased-in-a-way-that-fits-my-worldview takeaway is that she’s throwing shade at fat people, i.e. her boss’s supporters. I mean, what if these yoga pants are all that fits them right now? It’s a distinct possibility when butter’s not a carb, but a food group.

Of course, none of this matters. Soon Congress will make having an empty uterus illegal, or Trump will tweet a picture of his dick to the Queen of England, and we’ll all forget that it ever happened.

But stay woke, Betches. Need we remind you, your right to wear yoga pants has long been under attack: