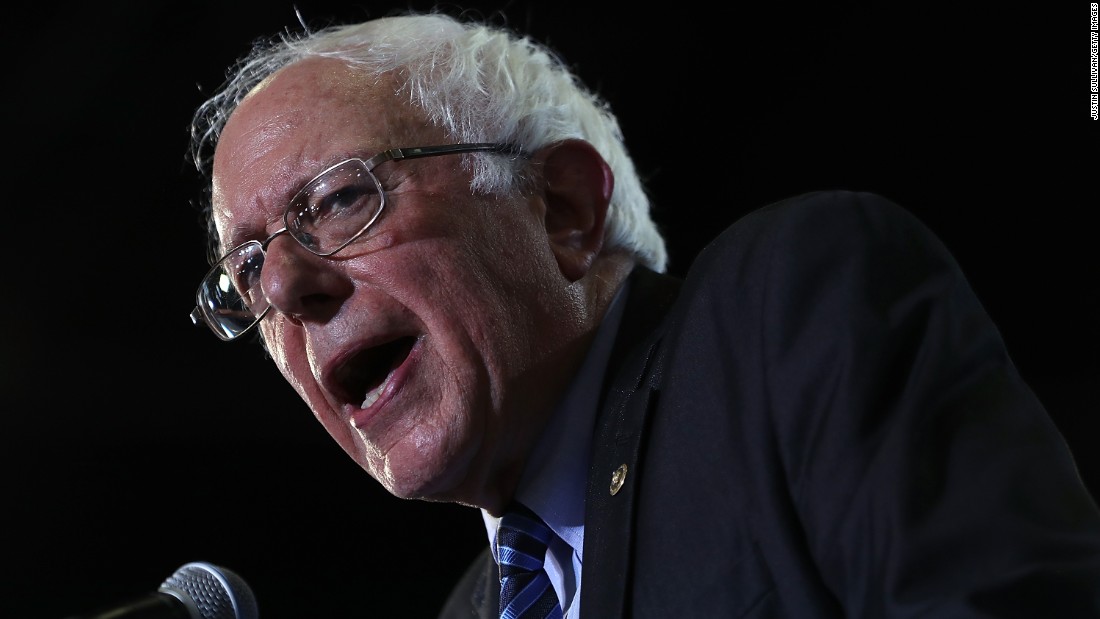 (CNN)President-elect Donald Trump will find himself with an unlikely ally if he makes good on his promise to be an economic populist challenging corporate America, Bernie Sanders said Thursday.

“If Mr. Trump has the guts to stand up to those corporations,” said the former Democratic presidential candidate, “he will have an ally with me.”
The willingness on the part of Sanders, a longtime democratic socialist, to work with Trump on a series of economic issues underscores the unorthodox and strikingly populist message that Trump used during his stunning victory over Hillary Clinton.
Sanders, speaking with reporters at a Christian Science Monitor sponsored breakfast, said he is ready to embrace Trump on a handful of campaign promises. Those include protecting Social Security and Medicare, negotiating for lower drug prices, raising the minimum wage to $10, imposing tariffs on companies that ship jobs overseas, and re-regulating Wall Street by re-establishing Glass-Steagall.
On these issues, Trump’s promises put the President-elect closer to Sanders than to most Republican Party leaders. House Speaker Paul Ryan, for example, would not commit to passing Trump’s tariff plan during a Sunday appearance on CNN’s “State of the Union with Jake Tapper,” saying that the solution is reforming the US tax code, “not tariffs, not trade wars.”
By embracing Trump’s left-leaning stands, Sanders is hoping to make progress on issues of long-standing concern to the Vermont senator. If Trump backs away from these promises and sides with the conventional conservatives who lead the Republican Party in Congress, Sanders believes that Trump will be exposed as a “fraud.”

Sanders has not spoken one-on-one with Clinton

Sanders, who is promoting his new book, “Our Revolution: A Future To Believe In,” during a series of appearances across Washington, is stepping into the leadership vacuum of the Democratic Party.
He said it was not productive to look backward, waving off a question about whether he could have defeated Trump if he had won the Democratic nomination with a “who knows?” response.
Long-running tensions between Sanders and Clinton have not fully cooled. Sanders said he had not spoken directly with Clinton following her loss, but only on conference call with other Senate Democrats.
Several Clinton advisers have blamed the primary campaign with Sanders for weakening Clinton’s candidacy in the general election, a suggestion Sanders dismissed.
“At the end of the day, my candidacy ended up being helpful to her — if we believe candidates should not be anointed,” Sanders said. “I’m happy to say my campaign brought millions of people into the political process, the vast majority of whom ended up voting for Hillary Clinton. I think it played a very positive role.”
Sanders said Clinton “has a very important role to play” in rebuilding the Democratic Party, noting that she received more votes than Trump.
“Does that mean she and I are going to agree on every issue?” Sanders said. “Frankly, we are not going to agree on every issue, but her voice is important to be heard.”

Even as Sanders offers to work with Trump on the populist components of his economic program, critical differences remain.
Sanders is calling on Trump to fire Steve Bannon, the controversial former Breitbart executive who was recently named chief strategist of the Trump White House.
Sanders is promising to fight Trump “tooth and nail” on climate change, an issue that Trump has dismissed as a “hoax.”
The Vermont senator opposes Trump’s tax policy, which would cut taxes for the top 1% of earners by $317,000 per year, according to the Tax Policy Center.
And Sanders said it would be “an outrage” that would “completely divide the country” if Trump were to make good on his promise to appoint a special prosecutor to “lock up” Clinton.
But on a series of bread-and-butter issues, Sanders said that Trump’s campaign spoke to the concerns of the working class and promised to work with the President-elect “if Mr. Trump was sincere.”
Asked by CNN about Trump’s call to establish tariffs on companies that relocate jobs overseas, a promise that Trump set forth in his “Contract with the American Voter,” Sanders said that Trump was right to stand up to corporations like Carrier and Nabisco that want to outsource jobs and vowed to work with Trump on this issue.
“A tariff may well be one of those options,” Sanders said.
“(Trump) talked about a collapsing middle class in America,” said Sanders. “He is right.”