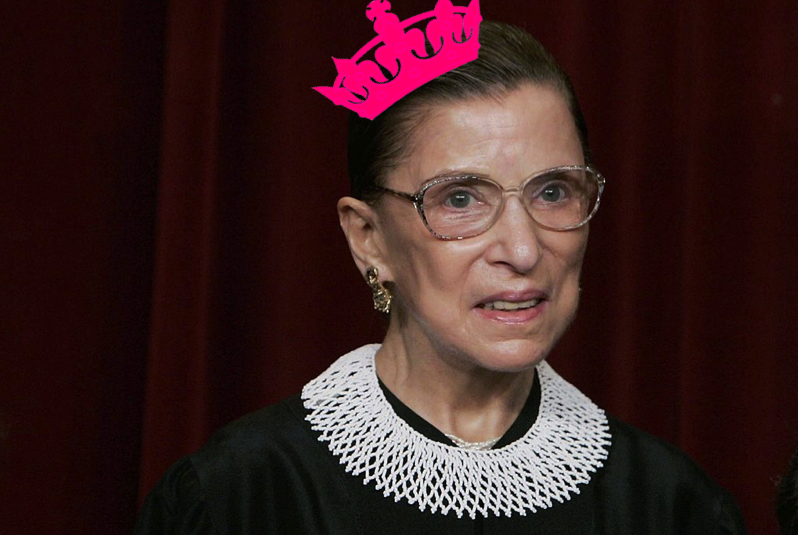 We’d like to publicly announce that the founding fathers left out a very important part of the Declaration of Independence: We hold these truths to be self-evident, that Ruth Bader Ginsburg is the betchiest member of the Supreme Court. The Notorious RBG is basically the child of Miranda Priestly, Elle Woods, and God. Whether she’s bitching about Trump, interpreting the Constitution, or starring on tote bags, Ruth is simply the GOAT.

It also turns out that homegirl is in better shape than any of us. She and Khlo Kardashian have something in commonthe most important people in both of their lives is their personal trainer. Here’s the DL: She works out twice a week after work from 7-8pm, which is the same routine for every finance bro squeezing in a lift between leaving the office and going out. And unlike girls who only go to the gym right before date party season, Ruth doesn’t make any noises during her workouts and she doesn’t rest between sets. So basically, Jillian Michaels ain’t shit.

RBG’s workout routine includes a five minute warm-up on the elliptical, front and side planks, pushups (the real kind, not the “girl” pushups on her knees), a step series on an 18-inch high plank, stand-up sit-downs with a medicine ball toss, and a whole bunch of balance exercises. That all sounds like a classic post-divorce routine. But Ruth then includes three sets of ten reps: 70-pound bench press, leg curls, leg presses, chest flies, and lat pull downs. Tbh I don’t know what most of those exercises even are, but it all sounds like the “gym” portion of The Situation’s GTL routine. Seems legit. She finishes that up with a Karashian-esque squat series: one legged squats, wall sits with dumbbell curls, and squats on a Bosu ball. I’m sore just thinking about it. AND SHE IS 83 YEARS OLD. Let that sink in. Now think about your life, think about your choices.

So to celebrate the woman, the myth, the legend that is RBG, here are 10 other times she was your spirit animal:

1. Last night, when she declined Donald Trump’s invite to his Congressional speech even though she never missed an Obama speech. She didn’t even bother to pull a Karen Smith and fake an excuse. She just said “nah” and enjoyed her evening in.

The Notorious RBG has other plans for the evening. pic.twitter.com/FWV8xXXAQ3

3. RBG’s RBFseriously this woman has the most incredible resting bitch face (and cheek bones). Whether she’s directing it at a lawyer making a bad argument, one of her co-workers, or pretty much any politician, it is a national treasure.

4. Her deep commitment to black robes and statement earrings. While wearing uniforms for years may have scarred you from being an outfit repeater, you have to respect a woman who can look good in a failed swing dress and a glorified doily scarf. Plus, Ruth is the kind of woman whose closet is entirely black clothes aka all of our closets.

5. “If I had any talent in the world…I’d be a great diva.” Don’t pretend like you don’t say this to yourself at least five times a day.

6. That time when the Democrats asked her to retire so they could appoint somebody younger and she told them to fuck off. Ruth refuses to retire because she loves her job (k?) and DGAF what other people want her to do, and that is the lifestyle we should all aspire to (minus the working until we’re 83 years old part).

7. Her frenemy-ship with Justice Scalia. Ruth Bader Ginsburg and Antonin Scalia were besties outside of the Supreme Court and intellectual enemies inside the Court. They were truly the Blair and Serena of the federal government.

8. She went to Harvard Law School (what, like its hard?) until a Professor asked her “How do you justify taking a spot from a qualified man?” Then she literally said boy bye and transferred to Columbia Law.