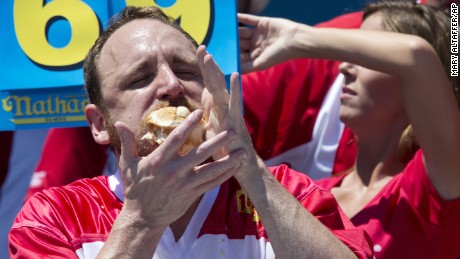 New York (CNN)Joey “Jaws” Chestnut chomped through the Coney Island contest record to reclaim his title as “Hot Dog Eating Champion of the World’ on Monday.

For the 100th year in a row, fans flocked to the corner of Surf and Stillwell avenues at high noon to witness the July Fourth feast. More than 35,000 spectators turn out for the event each year, according to the Major League Eating organization’s website.
Chestnut was all smiles after out-eating Matt “Megatoad” Stonie. Chestnut’s 70-dog total also polished off the former Coney Island contest record of 69.
Stonie, 24, just couldn’t keep up with Chestnut’s seven hot dogs and buns per minute, finishing only 53 hot dogs and buns. But they’ll both still take home a slice of the $40,000 prize purse.
And remember, these dog-downing contestants have to hold down the more than seven pounds of hot dog sandwiches they consume.
Chestnut, 32, went into the 10-minute speed-eating extravaganza looking for redemption. Stonie stole what would have been Chestnut’s ninth consecutive title in 2015 by eating 62 Nathan’s dogs and buns.
But on Monday, the coveted “Mustard Belt” was back in Chestnut’s hands.
The veteran competitive eater came hungry and humbled, telling reporters that he redesigned his training regimen, preparing for the showdown with one-minute eating sprints and a workout routine of weightlifting and running. He needed to improve his breathing while swallowing hot dogs, Chestnut told the assembled journalists.
He qualified for the Independence Day main event by shattering both his personal best and the world records with 73.5 hot dogs and buns in a Washington contest three weeks ago.
“As I was leaving last year, everybody was like, ‘Oh, it’s going to make next year better,’ and everyone was right. This year is the best year ever,” Chestnut told Major League Eating Commissioner George Shea, who emceed the event.
No hard feelings were evident among the rivals, who both hail from San Jose, California.
Chestnut assured the crowd in his post-victory interview that he’ll be back next year to give Stonie another shot at the chomping championship.