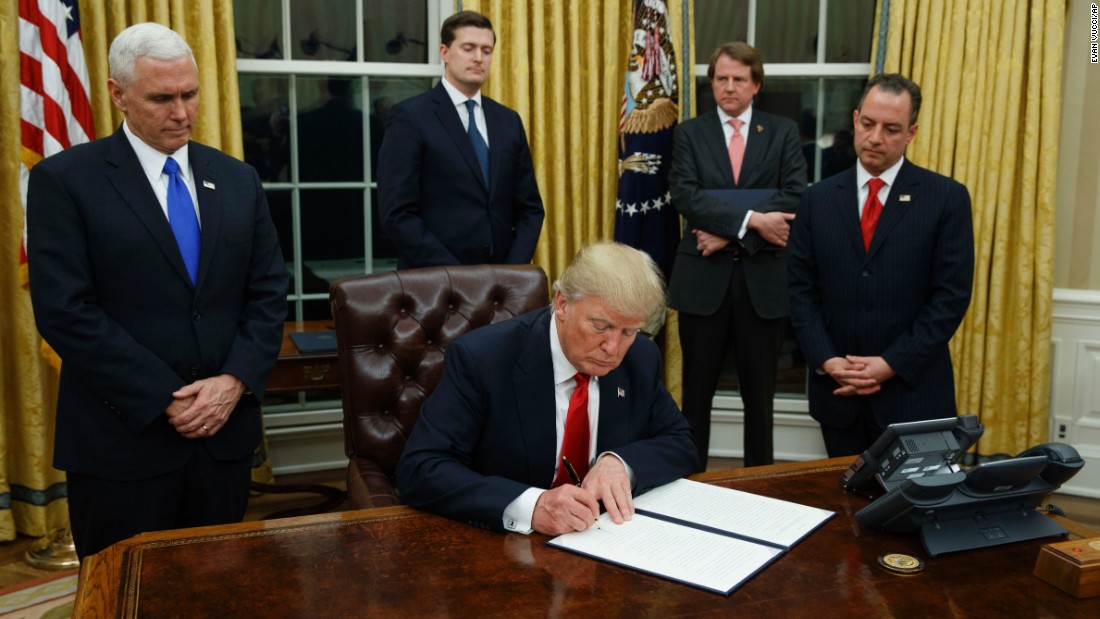 The “impenetrable, physical, tall, powerful, beautiful southern border wall” he pledged to build on the Mexican border has been reduced, on White House stationery, to a “physical wall on the southern border.” Trump has kicked off his administration with a slew of aggressive actions, but it might be hard to tell from the reading.
Here are a few examples of campaign technicolor translated into the black and white of legalistic, government documentation:
1. In February 2016, Trump made this promise to a voter in New Hampshire.
“Obamacare is a disaster and we’re going to repeal it and we’re going to replace it with something great.”
As the administration and congressional Republicans now grapple with doing just that, Trump on his first day in office issued an executive order directing federal agencies to back off enforcing the law’s mandate. Here’s what it said:
2. The construction of a wall — “not a fence” — on the US-Mexico border was a cornerstone of the Trump presidential bid. Appealing to voters, he led chants of “build the wall” and described the coming barrier like this during first rally:
“I will build a great wall — and nobody builds walls better than me, believe me — and I’ll build them very inexpensively. I will build a great, great wall on our southern border, and I will make Mexico pay for that wall. Mark my words.”
In the executive order Trump signed on Wednesday, he delivered the following, rather soberer instructions to the secretary of the Department of Homeland Security:
3. Trump has also issued an executive order aimed at sanctuary cities. Back in September 2015, he told a rally in Dallas: “We have to end this sanctuary cities crap.” Later in the campaign, he made this declaration:
“Block funding for sanctuary cities. We block the funding. No more funds. We will end the sanctuary cities that have resulted in so many needless deaths. Cities that refuse to cooperate with federal authorities will not receive taxpayer dollars, and we will work with Congress to pass legislation to protect those jurisdictions that do assist federal authorities.”
And this is what it looked like on paper this week:
Here’s how his opposition to the deal sounded on the stump, at a rally in St. Clairsville, Ohio, in June 2016:
“The Trans-Pacific Partnership is another disaster done and pushed by special interests who want to rape our country — just a continuing rape of our country.”
And this is what the formal departure looked like in a presidential memorandum from January 23. This, after a preamble on the importance of trade and American jobs:
5. The Keystone XL pipeline, which would deliver more than 800,000 barrels of petroleum daily from the Canadian oil sands to refineries on the US Gulf Coast, was blocked by the Obama administration in 2015. Trump did not agree with that decision and made it a bone of contention during the campaign. Here’s what he said last January in Iowa:
“When they do the Keystone Pipeline — I want it approved, I want all those jobs — I like a lot of oil flow, because right now we’re low.”
And here’s what the announcement that Trump would re-open the process looked like in a presidential memo issued this week: