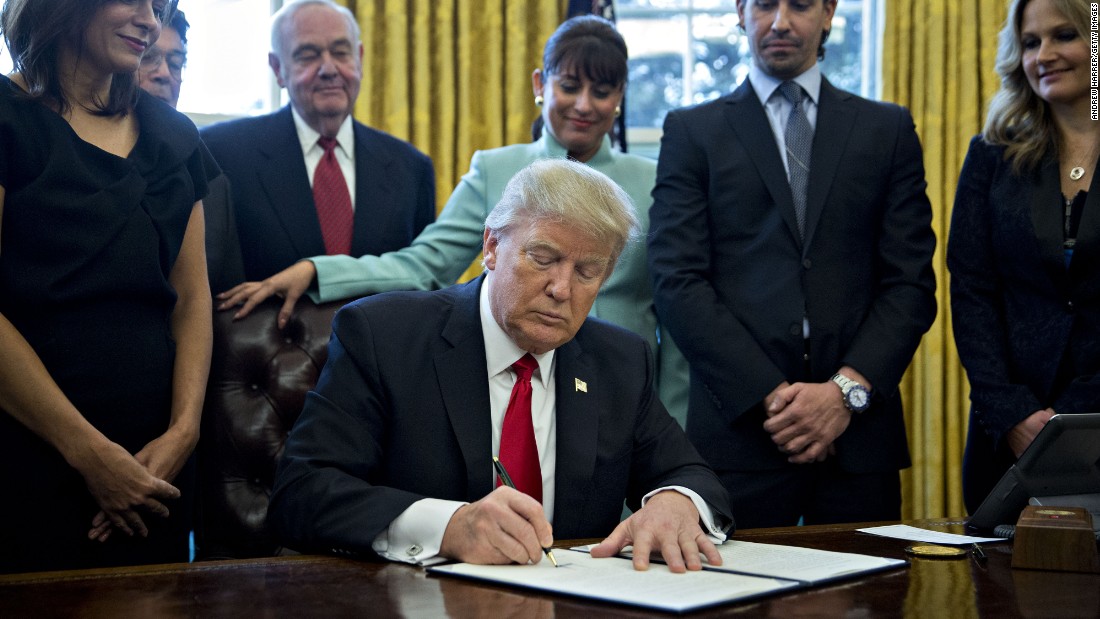 (CNN)President Donald Trump’s executive order to reduce regulations by killing two agency rules for each new one that’s added may be more complicated than he thought.

The order, which Trump signed on Monday, fulfills a campaign promise to direct federal agencies to “identify at least two existing regulations to be repealed,” whenever they seek to enact a new one.
The order also calls on agencies to offset the cost of any new regulation by eliminating old regulations. Exactly how this would be done is not spelled out.
Other countries, including the United Kingdom and Canada, have had some success with such “regulatory offset programs,” said Susan Dudley, the director of George Washington University’s Regulatory Studies Center. Such policies, Dudley explained, have “potential not only to reduce the accumulation of regulatory burdens, but to force evaluation of what has and hasn’t worked in the past.”
But Trump’s order “may raise more questions than it answers,” she said.
First on CNN: Treasury secretary nominee’s foreign money links bring new scrutiny
David Goldston, who runs governmental affairs at the Natural Resources Defense Council, told CNN that Trump’s plan was “flawed in principle and difficult to implement.”
“Having a new problem to address doesn’t mean that any existing one has gone away,” Goldston said in an email.
And “given that the law requires that repeal of rules go through the same process as issuance of them and both can be challenged in court,” Goldston said, “it will be hard to remove and put in place rules in sync.”
Deciding which rules to slash may pose another challenge.
The most high-profile targets for cuts may be those that cost the most, called “significant” rules. The White House definition includes rules that cost more than $100 million or adversely affect the economy. Examples include an FDA rule from 2015, requiring restaurants to publish calorie counts for their menu items, and several rules used to enforce parts of the Affordable Care Act.
While the federal government currently has tens of thousands of rules on the books, it has published just 5,000 “significant” rules since 2001, according to a CNN analysis of Federal Register data, which tracks new regulations.
That included 2,241 significant rules enacted when President George W. Bush was in office and 2,759 during the Obama administration.
In the past 16 years, the Department of Health and Human Services enacted 642 significant regulations, more than any other agency. It was followed by the Environmental Protect Agency, the Department of Transportation and the Department of Agriculture.
The Securities and Exchange Commission enacted the fewest significant rules: Just one, in 2004, requiring hedge fund advisers to register with the SEC.
Many federal agencies have been looking for places to cut regulations for years.
In 2011, Obama signed a series of executive orders to launch an initiative called “Retrospective Review,” which requires agencies to analyze their regulatory requirements and draft plans to reduce regulations.
Businesses, think tanks look to influence Donald Trump with economic message on immigration
In August, a breakdown from the White House’s Office of Management and Budget said the effort had “removed more than 70 notable regulatory provisions from the books” and saved “an estimated $37 billion in cost savings, reduced paperwork, and other benefits for Americans.”
But such reviews are rarely very successful, Dudley told CNN. One advantage of Trump’s plan, she argued, might be that it encourages agencies to do more thorough analysis of their regulations before enacting new ones.
But “often once a regulation — especially a regulation that’s been in place for several years or a decade — people have learned to live with it.”
Even businesses, she said, “are not enthusiastic about getting rid of regulations that they’ve already complied with.”
And even as agencies continue their work of identifying and reducing unnecessary regulations, Trump’s plan to reduce costly regulations may face legal hurdles.
Analyses by OMB, which is tasked with weighing the costs and benefits of new significant rules, often find that regulations are a net good.
In its 2015 report to Congress, for example, OMB analyzed 2,851 rules and estimated that they produced an annual benefit of between $261 billion and $981 billion, vastly dwarfing their estimated cost, which ranges from $68 billion to $103 billion.
“The opponents of regulation tend to talk only about the cost and never about the benefits,” Goldston said.
“Protecting food quality, protecting air quality, protecting water quality, promoting energy efficiency, saving species that would otherwise go extinct in general, all these things became law because they reflected public concerns about real problems that people wanted addressed,” he said.