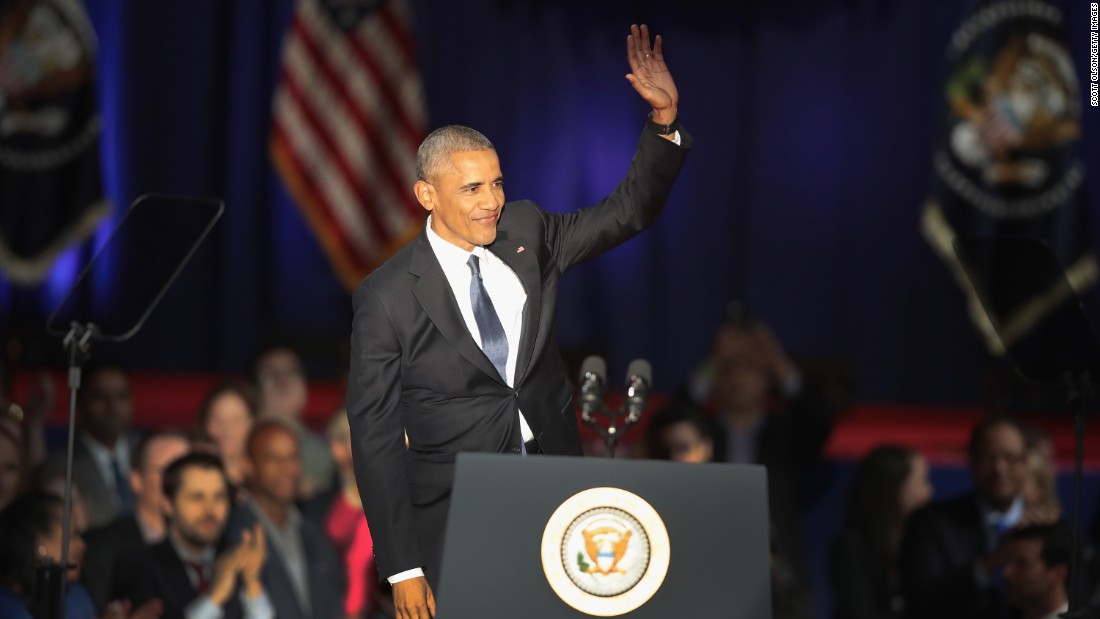 (CNN)Eight years ago, Barack Obama inspired Americans to embrace political change with the mantra “yes we can.” He bade them farewell Tuesday after a historic, tumultuous presidency with the words “yes we did.”

Obama revived the spirit and idealism of his 2008 campaign in a nostalgic, sometimes emotional final address to the nation from his hometown of Chicago, 10 days before he cedes power to Donald Trump, his antithesis in personality and politics.
The President stood unbowed and unapologetic after eight tough years, an unrepentant champion of hope and change.
Just as on a frigid morning in Springfield, Illinois, in February 2007 when he announced his White House bid, Obama strode on a walkway to a stage set in a huge crowd to his campaign anthem, “City of Blinding Lights” by U2.
Despite years of partisan gridlock, tarnished hopes that the nation’s first African-American president could represent a post-racial age, and the uncertainty of leaving his legacy in the hands of Republicans bent on destroying it, Obama defiantly defended his belief in the capacity of politics to empower transformational social and economic change.
President Obama farewell address: full text
“If I had told you eight years ago that America would reverse a great recession, reboot our auto industry, and unleash the longest stretch of job creation in our history…,” Obama said.
He continued:
“If I had told you that we would open up a new chapter with the Cuban people, shut down Iran’s nuclear weapons program without firing a shot, and take out the mastermind of 9/11… If I had told you that we would win marriage equality, and secure the right to health insurance for another 20 million of our fellow citizens — you might have said our sights were set a little too high.”
“But that’s what we did,” Obama said. “That’s what you did. You were the change. You answered people’s hopes. And because of you, by almost every measure, America is a better, stronger place than it was when we started.”

A speech for history

In a speech that was as much for history as for the moment, Obama essentially argued that America is as great as it has ever been, a beacon of democracy, equality and hope. That was a not-too-subtle contrast to President-elect Donald Trump’s “Make America Great Again” campaign slogan.
In many ways, Obama’s speech was a repudiation of those who said he raised unreasonable expectations with his hope-fueled campaign in 2008 and failed to change the tone of politics as he had promised.
He argued passionately for progressive change, economic and gender equality, a strong social safety net, a health care system like the one set up under his Affordable Care Act, and a tax code that does not overtly benefit the rich.
While its purpose was to say goodbye, Obama’s speech also felt more like the kind of campaign address he might deliver today, were he running for the White House for the first time. He spoke with the passion of a candidate, not a bowed lame duck president shuffling off into retirement.
He spoke of threats to America’s political system, at a time of dislocation and turmoil across the world, beseeching his supporters not to cede the fight to improve and safeguard their democracy, sounding as though he was worried about what might happen once he has left the White House.
While touting his achievements, he painted a picture of a nation tested by racial, economic and social strains, and in comments that appeared to be a reflection on the fury and division opened by the election in which Trump beat Hillary Clinton last year.
“There have been moments throughout our history that threatened to rupture that solidarity. The beginning of this century has been one of those times,” Obama said. “A shrinking world, growing inequality; demographic change and the specter of terrorism — these forces haven’t just tested our security and prosperity, but our democracy as well.”

Obama’s address was a departure from the more traditional farewell speeches given by past presidents it could hardly have been more different than the cozy, humble speech by President Ronald Reagan in 1989.
Indeed, the grandiosity and highly political tone of the event will likely irk Republicans who argue that Obama opened political divides rather than healing them as he promised in 2008.
The speech was also a reminder of the stylistic differences between the 44th President and the 45th President who will be sworn in next week — and the sharp divides in the nation which they represent.
Where Trump prefers social media bursts and stream of consciousness tirades, Obama’s speech was an illustration of what his supporters see as soaring eloquence, and critics brand as professorial lecturing.
The President only mentioned Trump in recalling his promise to the President-elect to preside over a smooth transfer of power. But much of his comments — and defense of his own record — could be taken as an implicit criticism of the man who will replace him in the Oval Office.
He decried the “selective sorting of the facts” that he said plagued modern politics, rejected discrimination against Muslim Americans, lambasted those who deny global warming is real and said “democracy can buckle when we give in to fear.”
“Without some common baseline of facts; without a willingness to admit new information, and concede that your opponent is making a fair point, and that science and reason matter, we’ll keep talking past each other, making common ground and compromise impossible,” Obama said. 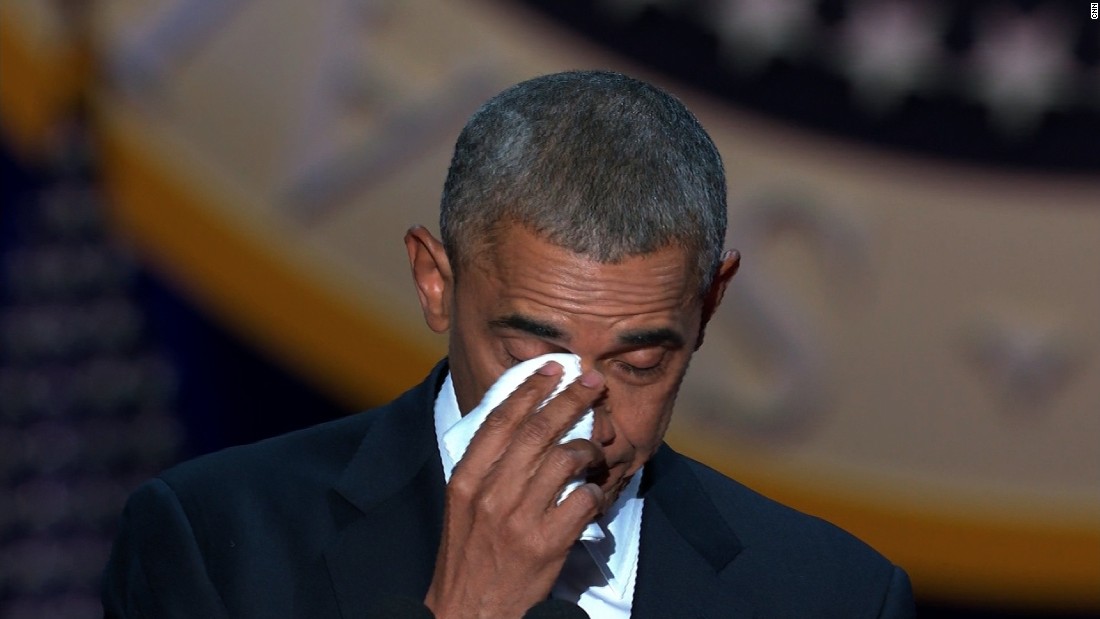 Obama tears up talking about Michelle

Obama became emotional when he paid tribute to his wife Michelle and his daughters Malia and Sasha
“You took on a role you didn’t ask for and made it your own with grace and grit and style and good humor,” he told the First Lady.
Coming full circle, Obama took his leave by recalling his 2007 campaign launching address — effectively arguing that everything he had said that day about being a catalyst for Americans to realize their own political change had been validated over the course of his presidency.
“You did change the world,” he said.
“I am asking you to believe,” he continued. “Not in my ability to bring about change — but in yours.”